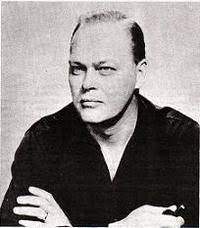 Uell Stanley Andersen (who frequently wrote under the name “U.S. Andersen”) was an American self-help, New Thought author as well as an early NFL football player.  He is best known for the short book Three Magic Words.

Born in 1917 in Portland, Oregon, Andersen played football in college for Stanford before going on to the NFL, playing for the Cleveland Rams (1940–1941) and Detroit Lions (1941), appearing in 22 NFL games.

Early in life Anderson became interested in the Christian Science writings of Mary Baker Eddy, and went on to study the mystical teachings and philosophies of Emmanuel Swedenborg, Edgar Cayce, Daniel Dunglas Home, amd Jacob Boehme.  It is also reported that he studied the works of New Thought teacher Ernest Holmes.

Andersen served in the US military during World War II, afterwards launching a career as a writer, both fiction and non-fiction. Although many of U.S. Anderson’s writings were not necessarily catagorized as New Thought during his time, many of his concepts of Mind and Reality were inline with New Thought teachings. Uell was also an articulate spokesperson for mystical patriotism–the spiritual meaning of America. He gave powerful lectures and his insights into ecology led to the founding of his Atlantis University in Newport, Oregon, from where he taught his own brand of mysticism.

A few of Andersen’s books can be found in the public domain, others are available only for purchase.  There are many people who have “republished” his works that you can purchase, most at nominal costs.  Many can be found as e-books and audiobooks, as well.  Search Amazon or other booksellers to find books for purchase.  The following books linked here are for FREE books only.  Where content can be found in multiple places for some items, have only listed one source.

The Magic in Your Mind

The Magic in Your Mind