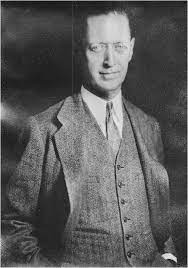 Robert Collier, who was born April 19, 1885 in St. Louis, Missouri, was an American author of self-help and New Thought metaphysical books in the 20th century. He was the nephew of Peter Fenelon Collier, founder of Collier’s Weekly, a popular US magazine in the middle of the 20th century.

Although Collier first worked as a mining engineer in West Virginia, he later moved to New York City and began a career of writing, editing, and research for much of the rest of his life.

Suffering from a long term undiagnosable illness, Collier was able to use mental healing techniques to heal himself, launching an interest in New Thought metaphysics, the occult and techniques of personal success.

His 1926 7 volume set of books entitled The Secret of the Ages sold over 300,000 copies during his life. Collier wrote about the practical psychology of abundance, desire, faith, visualization, confident action, and personal development.

Starting in May 1929, Collier’s organization published a monthly magazine called Mind, Inc. The magazine was initially about half fiction, with much of the material religious in nature. By 1932 almost all the fiction had disappeared. The title changed to Mind Magazine with the May 1932. It continued to appear until at least 1939.

Robert Collier wrote four more courses, which he sold separately as, The God in You, The Secret Power, The Magic Word, and The Law of the Higher Potential. He later combined this excellent material into one book and named it, The Law of the Higher Potential. It has since been renamed, Riches Within Your Reach. He also condensed the seven volumes of The Secret of the Ages into one book, which has proven to be a best seller for many, many years. It has been translated into German, Italian, French, and Spanish, and sold all over the world.

Collier died January 9, 1950. However, Robert Collier Publications, Inc. still exists through the efforts of his widow, and now his children, grandchildren, and great-grandchildren. Collier’s books, which have been popular with self-help and New Thought groups, have been brought back to prominence from being referenced in the popular early 21st century metaphysical movie The Secret.

Only a couple of Collier’s books can be found in the public domain for free.  However, there are many people who have “republished” his works that you can purchase, most at nominal costs.  Many can be found as e-books and audiobooks, as well.  Search Amazon or other booksellers to find books for purchase.  The following books linked here are for FREE books only.

The Secret of the Ages

The Lost Word of Power

The Kingdom of Expansion

The Secret of the Ages