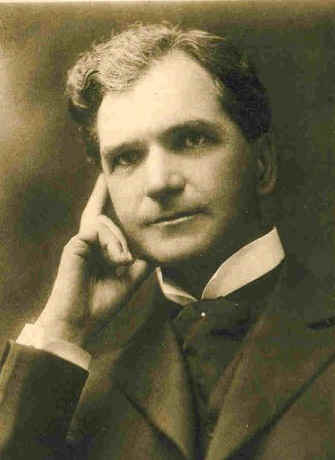 Ralph Waldo Trine was one of the most popular New Thought authors in the early days of the 20th century. His most well known book was In Tune with the Infinite which sold over 2 million copies.

Trine was born in Illinois in 1866 and attended the University of Wisconsin in his early twenties. In his mid twenties he attended Knox College in Illinois and graduated receiving a Master of Arts degree in 1891. He then attended Johns Hopkins University studying history, social science, and political science where he concurrently worked as a journalist for the Boston Daily Evening Transcript. Trine earned a large cash prize for an essay he wrote in the late 1800s on how education lowered crime. He became involved in social problems related to animals and became director of the American Humane Society and the Massachusetts Society for the Prevention of Cruelty to Animals. Trine was a vegetarian.

Trine was both a student and teacher of rhetoric at Emerson College in 1892 where he had an influence on E. W. Kenyon, who went on to become the father of the Word of Faith Movement, an Evangelical Christian philosophy. He then moved to Mount Airy, New York area where he built a cabin when he was 30 years old in 1896. Situated near a grove of pine trees, the property provided an ideal environment for his writing talents. At this time he met his future wife Grace Hyde an author of poetry and plays. Living in the area for many years, while raising their only child, Robert, they became involved in metaphysical seminars that were held at Lake Oscawana. Later they moved to California and continued writing.

Trine was influenced by writings of Emmet Fox, Johann Gottlieb Fichte, Ralph Waldo Emerson and Henry Drummond. Trine’s book What All the World’s A-Seeking amplified on ideas and concepts Drummond brought up originally in his book, The Greatest Thing in the World and Other Addresses. Trine’s primary work, In Tune with the Infinite was published in 1897. It has been translated into some twenty languages and millions of copies have been sold. It was a favorite of Queen Victoria and Janet Gaynor. Henry Ford attributed his automobile business and financial success to ideas he picked up from Trine’s book. He gave away copies of Trine’s book to executive industrialists he knew. Ford considered Trine an old friend and had several intimate conversations with him about life and success. He attributed many aspects of his success in life directly to these talks with Trine.

Trine was a philosopher and teacher besides being the author of many books related to the New Thought movement. He was introduced to the movement in the late nineteenth-century and was an advocate in the early twentieth-century of the related ideas. He was one of the first of its representatives to write books on it. His writings had an influence on other religious people including Ernest Holmes, a pioneer of Religious Science. Trine’s books of the early twentieth-century on New Thought ideas have promoted and sold more than any other of this genre. The basic principles that Trine wrote about were later published by other self-help authors like Napoleon Hill and many others. Trine served for a time on the board of the International New Thought Alliance.

Most of Trine’s books can be found in the public domain.  There are a number of book sellers who have “repackaged” them for current day sale online at fairly modest costs.  Search Amazon or other booksellers to find such books for purchase.  Below are links that we are aware of that provide FREE copies of Trine’s books.

In Tune with the Infinite     (Most popular!)

In the Fire of the Heart

In the Hollow of His Hand

On the Open Road

The Greatest Thing Ever Known

The Higher Powers of Mind and Spirit

The Land of Living Men

The Man Who Knew

The New Alinement of Life

This Mystical Life of Ours

Through the Sunlit Year (book of daily inspirational readings)

What All the Worlds A-Seeking

In Tune with the Infinite

The Greatest Thing Ever Known

The Wayfarer on the Open Road

This Mystical Life of Ours