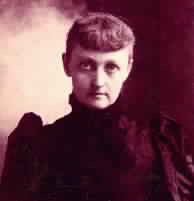 Emma Curtis Hopkins (September 2, 1849 – April 8, 1925 age 75) was an American spiritual teacher and leader. She was involved in organizing the New Thought movement and was a primary theologian, teacher, writer, feminist, mystic, and healer, who ordained hundreds of people, including women, at what she named (with no tie to the Christian Science church in Boston) the Christian Science Theological Seminary of Chicago.

Emma Curtis Hopkins was called the “teacher of teachers” because a number of her students went on to found their own churches or to become prominent in the New Thought Movement. These included the founders of Divine Science (Malinda Cramer, Nona Brooks and Fannie Brooks); Unity (Charles and Myrtle Fillmore); and Religious Science (Ernest Holmes).

Hopkins originally trained with Mary Baker Eddy who founded Christian Science. She worked with Eddy editing her magazine for one year before being let got by Ms. Eddy and then going on to forming her Chicago seminary.

Some of Hopkins’ books can be found in the public domain for free and are listed below.  However, all of her books are still in print and offered for purchase by Wise Woman Press. In addition, you can also find various audio recordings done by individuals of her books that they offer for a cost.

The Radiant I Am

Spiritual Law in the Natural World

The Radiant I Am

NOTE: One can find a lot of other material online about Hopkins with some simple searches.  The following seemed to be more complete and useful than others leading me to listing them here:

The Mysticism of Emma Curtis Hopkins  –This is a 6 part audio recording of a lecture series by John Rankin on Hopkins.  Includes a multipage PDF handout.  Available by TruthUnity.Net website.