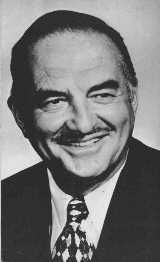 Donald Curtis (born Curtis D. Rudolf; February 27, 1915 – May 22, 1997) was an American actor who had roles in more than 200 films and television series.  See the links below to go to his Wikipedia page or IMDB for more on his extensive acting career.

While working as an actor, Donald Curtis discovered New Thought through the Science of Mind teachings of Ernest Holmes. Holmes, after meeting him and training him, encouraged Curtis to go into the ministry.  The idea resonated with Curtis who then began is training in 1949.

He was a noted author and lecturer. He published over 30 best selling books including the following: Helping Heaven Happen, Your Thoughts Can Change Your Life, Human Problems and How to Solve Them, Daily Power for Joyful Living, The Golden Bridge and New Age Understanding. He authored many inspirational booklets and wrote numerous articles which appeared regularly over the years in Science of Mind magazine, New Thought Quarterly, and Unity periodicals. His writings have been used as textbooks in healing, meditation, and spiritual education at many churches and centers.  A student of Eastern Religions, he published his final book Understanding and Standing Under The Bhagavad Gita in October, 1996, for which well known author Wayne Dyer wrote the forward.

Curtis died shortly afterward in May 1997.

Human Problems and How to Solve Them

One World One God

5 Minutes that Will Change Your Life (Short radio notices)

None of Curtis’ books can be found in the public domain.  Most of his books can still be found via bookseller searches.  Search Amazon or other booksellers to find books for purchase.