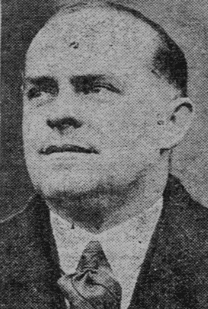 Born 1891, Claude M. Bristol served as a soldier in WW1 in France and Germany. He worked on the army newspaper, Stars and Stripes until 1919. His best known book is The Magic of Believing, published in 1948, which has sold well over a million copies, and is widely regarded as a prosperity classic.

The Magic of Believing was written, he says, for ex-service men and women who would have to adjust to civilian life and try to prosper in it. It was published when he was in his 50s and followed the success of a small book he published in 1932 entitled T.N.T.— It Rocks The Earth.

Claude Bristol was a hard-headed journalist for several years, including stints as a police reporter and as church editor of a large city newspaper. In this post he met people from every denomination and sect, and later read hundreds of books on psychology, religion, science, metaphysics and ancient magic. Gradually, Bristol began to see the ‘golden thread’ which runs through all religions and esoteric teachings: that belief itself has amazing powers.

Having spent years thinking about the power of thought, he had assumed others knew something about it too. He was wrong. Strangely, he found that most people go through life without realising the effect that strong belief can have on reaching their goals – they leave their desires vague and so they get vague outcomes.

When Bristol was a soldier in World War One, there was a period in which he had no pay and couldn’t even afford cigarettes. He made up his mind that when he got back to civilian life “he would have a lot of money”. In his mind this was a decision, not a wish. Barely a day had passed after his arrival back home when he was contacted by a banker who had seen a story on him in the local newspaper. He was offered a job, and though he started on a small salary, he constantly kept before him ‘a mental picture of wealth’. In quiet moments or while on the telephone, he doodled ‘$$$’ signs on bits of paper that crossed his desk. This definiteness of belief, he suggests, more than anything else paved the way for a highly successful career in investment banking and business.

Bristol had learned the truth of philosopher William James’ statement that “Belief creates its verification in fact”. Just as fearful thoughts set you up to experience the situation you can’t stop thinking about (the Biblical Job said: ‘What I feared most had come upon me’), optimistic thoughts and expecting the best inevitably form favourable circumstances.

Bristol’s The Magic of Believing has inspired many people throughout the 50+ plus years since it was written, from all walks of life, from salespeople to performers, and from housewives to politicians. The book was about achieving goals through mental visualization, and using faith as a means of drawing the people, circumstances and opportunities together to make it happen.

Claude Bristol explained that he didn’t invent this idea, and in fact many people had used the same principles throughout the course of history to achieve much. He went on to write a third book entitled TNT: The Power Within You.

His books were based on decades of searching for a deeper understanding of, and applying, what he called “mind stuff.” This work came from his experience as a journalist studying and reporting on the full spectrum of spiritual and religious movements (especially fringe groups), building his own wealth and career as an investment banker, and his study of thousands of books on “the science of thought”.

Bristol was a popular speaker to clubs, business organizations and salespeople. He died in 1951.

Some of Bristol’s books can be found in the public domain.  There are many people who have “republished” his works that you can purchase, most at nominal costs.  Many can be found as e-books and audiobooks, as well.  Search Amazon or other booksellers to find books for purchase.  The following books linked here are for FREE books only.

The Magic of Believing (audiobook)

TNT It Rocks the Earth (audiobook)

The Magic of Believing PDF