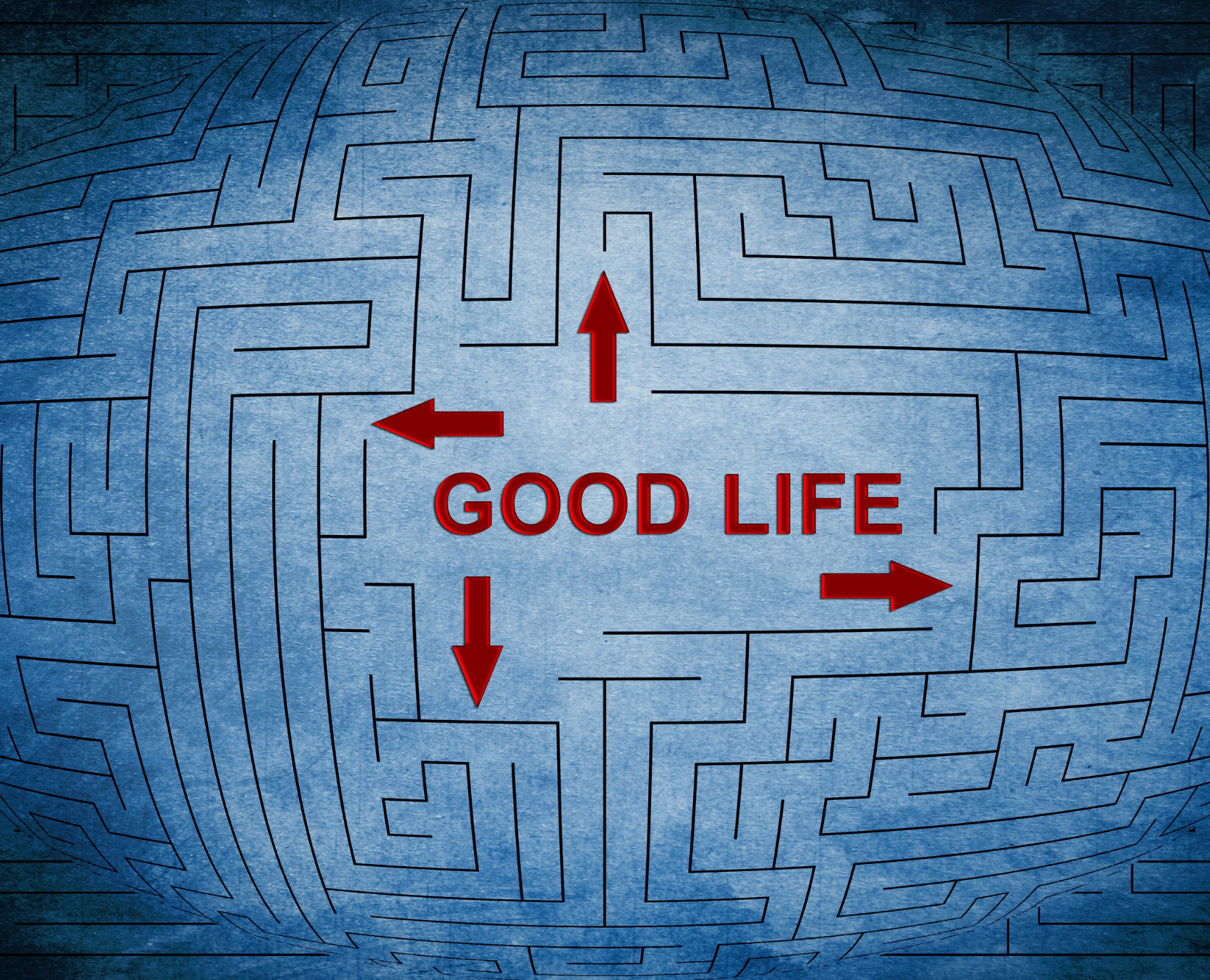 I’ve been doing some painting around the house.  Turns out this is a good time to listen to audio books.  Recently, I ended up listening to Napoleon Hill’s Think and Grow Rich.

This is the first time that I have “listened” to it.  I have “read” it several times, my first time when I was in my 20s. Although I have gotten benefit from it each time, I have never pointed at this book as one of the most influential in my life.  However, I do have many New Thought friends who cite this book as a major influence.

It is worth the time to read it if you never have (or listen to it).  Originally published in 1937, the book is in the public domain, and you can find free copies online.  Here is a link to one. Or you can find low-cost copies to purchase or find it for free at your local library.

Today, I want to share a few thoughts on Hill’s book and expand upon the idea of what it means to be “rich”.

Summary of the Major Points of Think and Grow Rich

According to Hill, he was tasked by millionaire businessman Andrew Carnegie to study the common characteristics of successful (i.e., rich) people and to bring what he found “to the world”. (Some researchers dispute Hill and Carnegie ever met).  Hill then spends 20 years analyzing the habits of “hundreds of well-known men” and then distills his findings into this book (as well as a number of others he wrote).

He refers to what he found out as “the secret” (obviously influencing Rhonda Byrne and her 21st century book and film by that name).  He then teases us with saying that we will find this secret in every chapter but that we will have to read the book and discern it for ourselves.

However, many have created summaries of the books major points and there is almost a cottage industry in making Hill’s findings more “accessible”. Here are a few links to some online sources I found beneficial, but there are many more out there.

Quick and to the point:  https://www.soundwisdom.com/think-and-grow-rich-summary

My favorite brief one which describes points quite well: https://wealthcreationmastermind.com/blog/think-and-grow-rich-summary/

I would also take a moment to give a nod to the books of Tom Butler-Bowden that I have written about previously.  I highly recommend his series of “50 Classics” book summaries which you can find here.

Each of the volumes is a great addition to your library.  Think and Grow Rich is summarized in 50 Success Classics. Like all of his summaries, he spends around 6 pages giving you “what you need to know” with a bit of his analysis.  He also gives a one-line summary of each book.  For Hill’s book, he boils it down to “wealth comes from increasing your power to think and developing your ability to access the universe’s intelligence”. That’s pretty accurate.

As I listened to the book, I had several observations that I had not really thought about before.

First, I think that on prior readings I felt that Hill focused solely on financial wealth.  That may be why I didn’t consider the book as a personal major influence.  I had the same criticism more recently of Byrne’s “The Secret”.  Yes, both Hill and Byrne were “meeting their audience where they were”, that is, recognizing that using the hook of “more money and stuff” would get folks to read the book.  Yet both hinted that the techniques they discussed could be used for other things beyond wealth. However, as I listened to Think and Grow Rich, I realized that although Hill’s stories generally focused on financial growth, he did define “riches” more broadly to include such things as good friendships, families that are supportive and get along, respectful and encouraging work relationships and a deepening of our spiritual life.

Second, I must acknowledge that his stories and descriptions given were a product of the early 20th century and can be a bit dated.  Yes, he studied “successful men” with no mention of successful women.  Yes, there is a story of a young black girl who is held up as a positive example of persistence even though the story is laced with some painful stereotypical language of the times.  It would be easy in this “woke” time to judge the book negatively for such things.  Yet, I also found that in spite of these things, Hill came through as someone who respected everyone and wanted everyone to be successful, regardless of their sex, race or faith.

Third, even though my prior criticism of the book focused on Hill’s over emphasis on accumulating money, upon this listening I realized that Hill was teaching much more of the concepts of New Thought than I had previously considered.  Yes, “thoughts are things” is the title of the first chapter and the book’s major message is on our recognizing the power of our thinking (heck, it’s in the title!).  But beyond that, Hill talks about God as “Infinite Intelligence”.  He points out that our minds transcend our brains, that our consciousness is not confined to us an individual but is actually part of a one greater mind. He describes the power of our subconscious to tap into this one mind and how our use of autosuggestions and controlled positive emotions can enhance the creative ability of our thoughts.  These and other things woven into the book obviously show that New Thought concepts were at the heart of Hill’s teachings.

Fourth, I did think that it would be easy to get bogged down in judgements about Hill and his book based on whether or not we believed that he actually met Carnegie or whether he really did study the people he claims to have studied.  Did he, like Stephen Covey more recently in his 7 Habits of Highly Effective People, actually distill his recommendations from research of certain people?  Or did he simply use the influences on his life (like Ralph Waldo Emerson and other New Thought writers) to create some principles that he packaged as based on research in a way to “sell them better”?  What I came to think is that it really doesn’t matter.  You either find that what he is teaching resonates with you or it doesn’t.  You either try them out in your life and see if they work or not.  If what he teaches truly benefits you is the real judgement, not whether his story about his source of the concepts is “really real”.

What Does it Mean to be Rich?

Which all leads me back to the question….what are we talking about when we say “rich”?  What does it really mean to “be rich”?

Yes, the common use of the term and the first definition in most dictionaries refers to “material wealth”.  Yet, the dictionary also offers other descriptions such as “having high value or quality” or “well supplied or endowed” or “plentiful or abundant”.

But as I have thought about the idea of “being rich”, the following realizations came to me:

How we define being rich depends upon where we are in our life and what we see as important. If our focus is on material wealth and “things”, then our definition of “rich” will be tied to such things. If our focus is on things that are “beyond material wealth” such as our friends, our family, our happiness, our wisdom, our spirituality and the like, then being “rich” will be tied to these non-material things.

It’s difficult to focus on “non-material riches” if we are struggling to meet our basic needs.  Think Maslow’s hierarchy for a moment.  If you are trying to meet “lower needs”, it’s hard to be motivated by “higher needs”.  For many of my early adult years, I was stressed about paying my bills and meeting the needs of my family.  As long as I was focused on my perceived gap between “what I needed” and “what I had” in material things, it was impossible for me to really see myself as truly rich in non-material ways.

The amount of “material riches” we “need” is not as great as we might think.  What’s important is the shift in our consciousness when we let go of our sense of “lacking”.  There was a point in my own life when I was making enough money that the stress went away. A key realization was that I didn’t have to be wealthy by society’s standards (as I wasn’t) to let go of the sense of “lack”.  What was critical was this change in my outlook about life and knowing that I had enough and was always provided for.  The shift in my feeling was very subtle but it had a lasting impact on my life. And it freed me to pursue deeper and more transcendent needs.

So what’s truly enriching your life?